A festival competition for knowledge of marketing and branding was held at the “Ala-Too” International University. The event was organized on April 10, 2021, by the Management Department and the Management Club.

More than 150 students from schools and universities took part in the festival. The competition consisted of two stages. During registration, participants took part in the musical interactive part of the event and competed in various entertainment categories. Participants were photographed and filmed, posting their creative ideas with the hashtag # BrandsBattle2021 on various social networks. The award for the top 5 best photo/video ideas under the hashtag                   # BrandsBattle2021 was given out in an envelope of 500 KGS by SMS taxi.

In the first round, the participants answered 100 questions in team mode for 40 minutes. The questions were about 40 selected brands from the world, the CIS and Kyrgyzstan. After the coffee break, the participants showed their knowledge of 15 brands represented in Kyrgyzstan and acted as partners-sponsors of the event. The connoisseurs-winners of this stage received valuable gifts from sponsors. The sponsors were such brands as: “Elite House”, “Kia Motors”, “Karven Club”, “Optima Bank”, “OSSE”, “Coca-Cola”, “Frunze”, “International American School of DAS Education”, “Bags_shop.kg”, “Bimar”, “SMS taxi”, “Book House”, “ORT kursy Do it”, “Tokyo sushi”, “Ala-Too International University”, “JIA Business Association”, “Semac Construction”.

Since the second stage lasted, we had to skip the third stage. We have identified the top 5 finalists based on the results of the first round. The first three teams were rewarded with cash prizes, according to their places. The team “Travelers” from  educational complex  #70 became the champion in the “School” category. The team “Totally spies” became the champion in the category “University”.

The festival ended with the solemn presentation of certificates and gifts to the winners. After such an educational festival, the organizers plan to hold similar events every year, bringing more and more innovations to them. 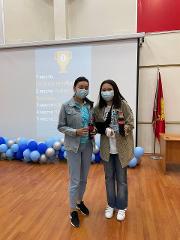